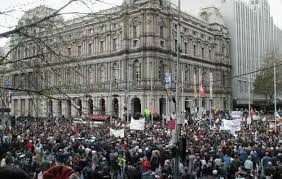 Henry McDonald in The Guardian has reported on the arrests of a number of people in Coleraine for posting pictures on Facebook of youths burning a poppy. Away from this particular and on-going investigation that I will pass no further comment upon, there is a need to consider whether there can be a right to shock and offend others. The right to freedom of expression, freedom to impart an opinion and freedom to march and protest is protected by law in Northern Ireland. However, these rights are not absolute. These rights can be restricted where such restrictions are set down in law, in the interests of a democratic society and  for reasons generally related to public order, public policy, morality, prevention of crime or disorder, economic well being of a country and protecting the rights and freedom of others. In the UK, there are several pieces of legislation that limit freedom of expression, opinion and protest.  In Northern Ireland, there is a prohibition on inciting hatred or arousing fear on the grounds of race, colour, nationality (including citizenship), disability, sexual orientation, religion or national or ethnic origin. Those guilty of such an offence can be fined and/or imprisoned for a period of up to seven years.  Northern Ireland also has a fairly unique approach to the regulation of marches and protests. These offences interfere with a number of rights, however would be viewed by the courts (both domestic and European Court of Human Rights) as legitimate restrictions on the exercise of such rights.

Purposefully offending a person or community of individuals for any reason may be gratuitous, religiously, racially or politically motivated. However, whatever the motivation, there is a defence to incitement of hatred and arousing fear, where the accused can prove that

he was not aware of the content of the written material or recording and did not suspect, and had no reason to suspect, that it was threatening, abusive or insulting

There is no explicit human right to shock and offend. Two reasonable individuals can come to two very reasonable, but opposite, views on what can be considered offensive. Such a trite realisation makes it all the more difficult for courts to determine when individuals intend to incite hatred or arouse fear. Holding a libertarian (or is it a contrarian?) view and arguing that there should be a right to shock and offend is not done in the hope that people will go around causing anguish or suffering to another person or community, but should be viewed as a corollary of the rights to express opinions and right to march/protest. Once such actions in and of themselves do not result in violence, injury or death, I have (over time) come to the realisation that words or actions that shock and offend need to be met with equally robust (and lawful) words and actions that seek to challenge those who may offend. However, I can see the merit and reasonableness of holding the opposite view, which is more in line with Northern Ireland (and European) standards of human rights protection.